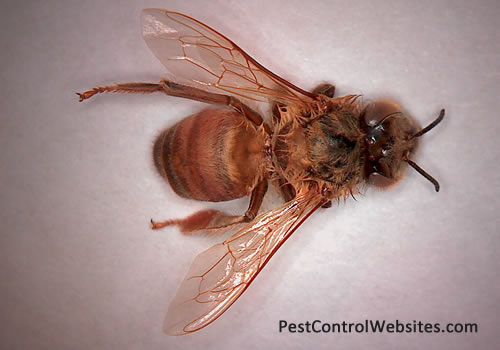 Honey bees are social insects found all over the world. They are an extremely important beneficial insect because of their role in pollination. Honey bees pollinate more than 100 crops in the U.S.

Honeybees produce honey from pollen and nectar of the plants they pollinate. They store the honey in honeycombs in their nests. They often build their nests in tree crevices, but will occasionally build nests in attics or chimneys.

Honeybees are active pollinators, and produce honey which feeds their young in colder months. The honeybee is the only social insect whose colony can survive many years.

Honeybees should be addressed by a professional. Removal of a honeybee nest and the honey product can be very messy. Because honeybee colonies are so large, only a pest control professional or experienced beekeeper can safely remove a honeybee nest.

Honeybees do sting, but they only sting once. The sting can be extremely painful if the stinger is not immediately removed from the sting. Persons allergic to insect stings will have a more severe reaction.