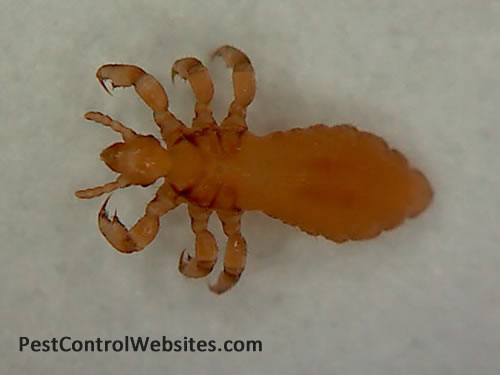 One of the best known lice is Pediculus humanus – the human louse – which has two distinct races. The race capitis may be found in the hair on the head, and their eggs, stuck to hairs, are termed nits. These can be very difficult and time consuming to remove – this is where the term ‘nit-picking’ came from. The race corporis is found on the body. Body lice can carry diseases such as relapsing fever (caused by Borellia recurrentis) and typhus (Rickettsia prowazeki) although only if they feed on someone who already has the disease. Sucking lice on domestic animals can also spread disease. Louse-borne disease is particularly common in wartime, when soldiers are forced to live in crowded and unsanitary conditions. Trench fever (Rickettsia quintana) was especially widespread during World War I, and was probably a major factor in the final collapse of the Russian army. Of these two human lice, the head louse is more common, and sometimes there are outbreaks of head lice infestation in schools. Head lice can survive any amount of washing and combing, so they are not associated with lack of hygiene. Luckily, whilst head lice can be irritating, they do not carry disease.

They live on mammals including humans.

Lice can cause itching and small welts on the skin. Their bites can result in hair and feather loss, blood loss and even skin infection if not managed.