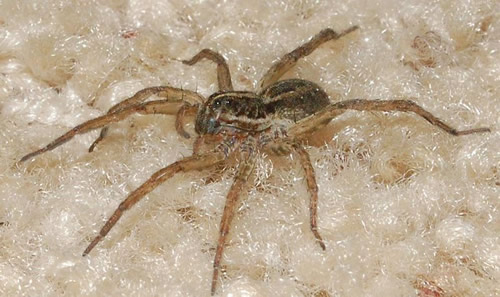 Wolf spiders are members of the family Lycosidae. They are robust and agile hunters with good eyesight. They live mostly solitary lives and hunt alone. Some are opportunistic hunters pouncing upon prey as they find it or even chasing it over short distances. Some will even wait for passing prey in or near the mouth of a burrow. There are many genera of wolf spider, ranging in body size from less than 1 to 30 millimetres (0.04 to 1.18 in). They have eight eyes arranged in three rows. The bottom row consists of four small eyes, the middle row has two very large eyes (which distinguishes them from the Pisauridae), and the top row has two medium-sized eyes.

Wolf spiders can be found in a wide range of habitats both coastal and inland. These include shrublands, woodland, wet coastal forest, alpine meadows, and suburban gardens. Spiderlings disperse aerially and consequently wolf spiders have wide distributions. Although some species have very specific microhabitat needs (such as stream-side gravel beds or montane herb-fields) most are wanderers without permanent homes. Some build burrows which can be opened or have a trapdoor.

They are robust and agile hunters with good eyesight. They live mostly solitary lives and hunt alone.

Caulking the cracks, crevices, and holes in the house so the spider can’t walk right in is the first step in control.

Wolf spiders are capable of defensive bites, and some South American species may give bites that are medically significant. However, in general their presence works in favor of humans because they consume insects. Wolf spiders will inject venom freely if continually provoked. Symptoms of their venomous bite include swelling, mild pain and itching. Though usually considered harmless to humans, the bite of some species may be painful.